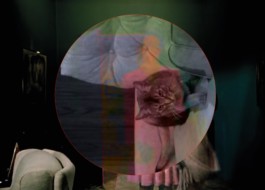 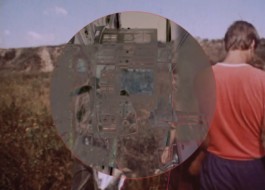 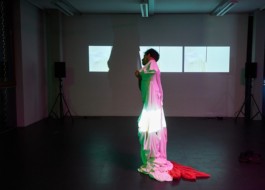 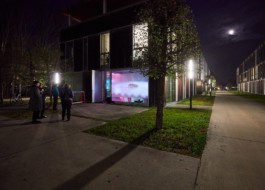 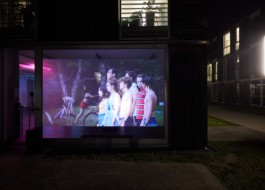 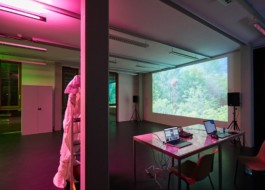 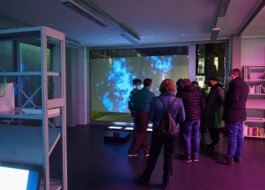 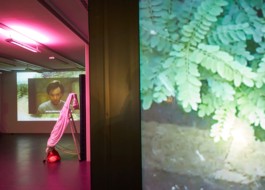 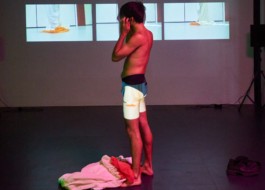 “Thinking of a future,” say Guilherme Maggessi and Rafał Morusiewicz, “always implies a horizon.” In their performance at Kunstraum Lakeside, the duo conducts a transmedial experiment dedicated to fabulating a future by employing various theorizations of futures, from José Esteban Muñoz’s queer utopia to Wendy Hui Kyong Chun’s “future as (a) memory.” While the former employs the adjective “future” as an intrinsic modality of queerness, looming in the horizon and always not-yet-here, the latter imagines a future as an upgrade, and not a radical change, to what already exists. In both, the present is a transition zone and a space for acting in the here-and-now, which continuously realigns itself to foresight, marked by coordinates of openness, dialogue ability, and inclusion. (...) The Statement in Kunstraum Lakeside is intended as the result of the convergence of Morusiewicz and Maggessi’s individual artistic practices, which manifests as a polylog between diverse narratives, media, and temporalities. Rafał Morusiewicz works with collaging experimental films. By superimposing and recutting films from various contexts (such as communist Poland in the 1950s—1980s) with diverse audiovisual and text elements, they reference the present but also imagine a future with the aid of the past. They are interested in the reappropriation and collection of narratives, through which they question the value typically conceded to the authorship of primary sources. Guilherme Maggessi, on the other hand, revisits images of Orientalization—as they were often developed and propagated in the modern era—by (re)producing them in new contexts. He subjects existing paintings and drawings to a visual “decomposing” process through different techniques, such as silk-screening and textile work.

"Duration Trouble" is the first episode in the series called “Wormhole Studies,” dedicated to extending the duo's visual-arts practice into performance. 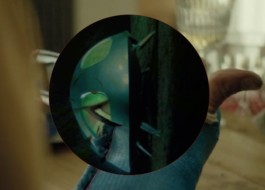 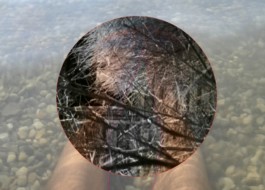